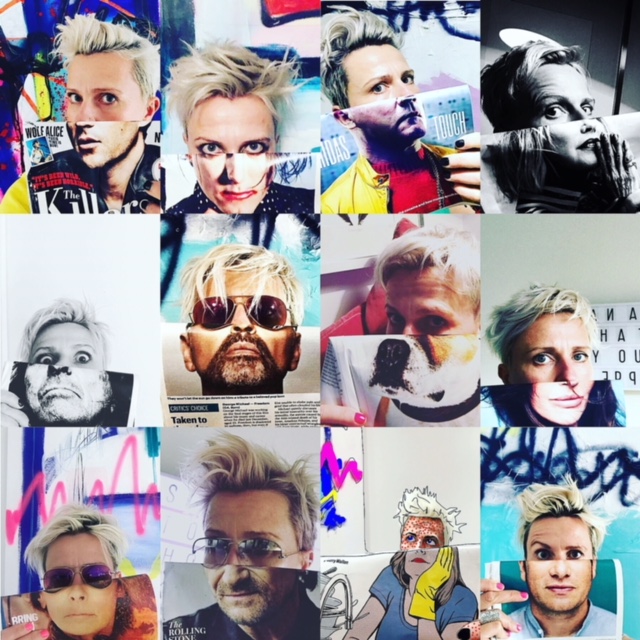 I’ve been making these images for just over a year now. They started off as a bit of a laugh with one of my lovely insta chums @junkshopvenus, but I haven’t been able to stop making them when I come across the right image. Matching my face to those photos of people I find interesting. Magazines are where I find inspiration as they generally have decent sized pictures and then the fun begins as I try to photograph them and me with my now trusty old iphone. The seemingly silly and joyful nature of this series of work is a perfect antidote to the sometimes heavy general stuff of life. I don’t pressurize myself with them, they are just what they are. I think Brandon Flowers and I have a similar hair do…. They make myself and others smile and sometimes, sometimes I’ve been known to do an air punch when it works really well! They are all rather iconic people in their own ways. You couldn’t think that these jawlines were anyone but whom they actually are. I think another reason I love making them is that it’s the figurative element to my work that’s not something I normally feel drawn to, or that I have a need to replicate or find a language for, although, recently the self portrait is something I’m turning towards more often…. is this because I’m at a time of life with so many changes occurring both physically and mentally let alone all that whirling change that endlessly occurs in life out there in the big wide world? Some are more frustrating than others to create. Robert Smith for example, from the classic Q Magazine image of him looking up at the camera was, I thought, going to be a doddle. But actually lining the magazine up with my face whilst I couldn’t see, the angle I had to hold the phone to get the eyes looking up correctly meant that about 300 photos later I eventually managed to capture it. It was worth the grump I caused myself and the frustration to get it as it’s one of my favourites. Some work like a dream and the Jamie Oliver one…. well frankly we fit far too well together! Most of the images have come from the Sunday Times Culture and Magazine sections and the from the fabulous Q Magazine. Two of the ways on a Sunday or when I get the chance, in which I like to properly take the time to waste a moment. Not that it is wasting a moment really but if you say you’re reading a magazine for work when you don’t actually work in the publishing business it can sound a bit like an excuse don’t you think….

I think George Michael is one of my favourites too. His beard is so iconic and yet it weirdly fits with my face and blonde hair. They do entertain me regularly and they also constantly surprise me. When they work, they really work. Of course I had to do a Face Off with that artistic rascal Damien Hirst. He and his contemporaries had just broken the mould of British art when I hit my art foundation course. They blew me out of the water with their antics, bravado and confidence. They showed me a whole new creative world and I quite simply fell in love.